You’ve tweeted like crazy last night, and we wish to thank you for that. Thousands of Bomb Girls tweets hit the airwaves during the premiere of Facing The Enemy.

As promised, we have picked three winners of a Victory Bandana out of everyone who tweeted #SaveBombGirls to @Global_TV yesterday. The winners were contacted by Twitter direct message for their contact details. Congratulations, and thanks to all of you for your participation! Live-tweeting during the Bomb Girls movie tonight may be your chance to win a number of super ginchy prizes!

The official Bomb Girls Twitter is giving away signed posters and genuine props from the set, and we’re giving away three of our Victory Bandanas.

Click the banners for more details. Best of luck to everyone!

Come and join us for our next Twitter party on March 27 and don’t miss the chance to win one of our ‘Keep Calm and Save Bomb Girls’ Victory Bandanas!

We’ve waited a long time for it, and it’s finally here: Bomb Girls – Facing The Enemy is airing on March 27 on Global TV. It’s a very bittersweet time for the Bomb Girls fans, because it may well be the very last time we see our Victory Munitions family on TV.

But not all is lost. There may be a chance that Global could be convinced to produce more Bomb Girls movies, but we need to tell them how badly we want to see that happen. Fans rallied and posted over 1,000 tweets to @Netflix on International Women’s Day, March 8th. Now we’re calling on the troops once again to join our next Twitter trending party: On March 27, starting at 7pm ET/PT, log on to Twitter and tweet #SaveBombGirls to @Global_TV and tell them you’d like to see more Bomb Girls movies. You can also help us live-tweet during the movie to get #SaveBombGirls or #BombGirls trending.

Please support us by spreading the word. Post about it on the social media, encourage friends, publish it on your blog. Feel free to use our banner above.

So what do I need to do to win a Victory Bandana?

Just tweet the #SaveBombGirls hashtag to @Global_TV on March 27, and we’ll randomly pick three winners who will each get a Victory Bandana like the one Ali Liebert is holding. The winners will be contacted via Twitter for their addresses and contact details.

There’s no time to lose, Bombshells. United we are strong. GO GET ‘EM!

It has just been announced that the 2-hour Bomb Girls movie ‘Facing The Enemy’ will air in the US on Memorial Day, i.e. May 26 at 9pm ET/6pm PT on Reelz.

It’s wonderful news that Reelz Channel will present the movie to the US American audience, and they seem to be just as happy about it as we are:

“We are excited to share such an important story with our viewers this Memorial Day,” said Stan E. Hubbard, CEO of REELZ. “With its magnificent cast, compelling characters and superb production, ‘Bomb Girls: Facing the Enemy’ is the perfect way to honor our veterans and has appeal that spans generations.”

ITV3 in the UK has also acquired the rights to air the movie in the UK, but no air date has been announced yet. There’s no word yet on whether or when Netflix will add the movie, but there’s a very good chance that they might. Hooray, it’s Bomb Girls Movie Week! And we can also happily announce we currently have a total of 7,308 comments in our repository. Thank you to everyone who sent in V-MAIL, keep it coming! 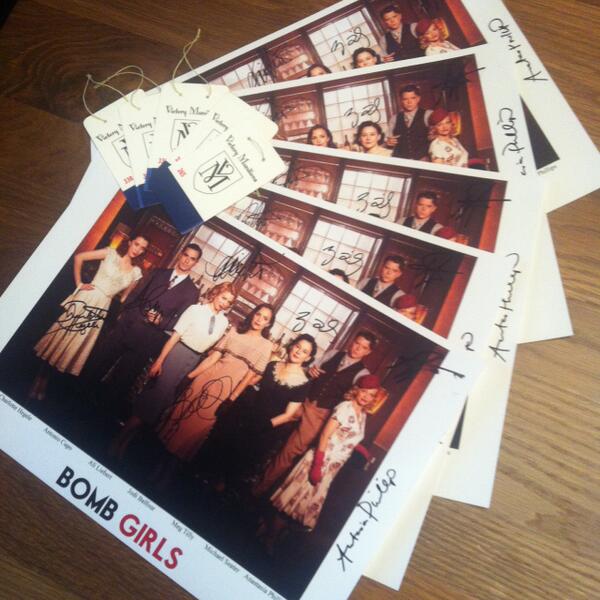 We’re bringing you our latest V-MAIL update today. We now have a total of 7,140 comments in our repository. Thank you to everyone who sent in V-MAIL, keep it coming!