Great news for all Bombshells, Shaw Media announced today that the “Bomb Girls – The Movie” shoot is underway. Let me cite their press release, which has all the pertinent information: 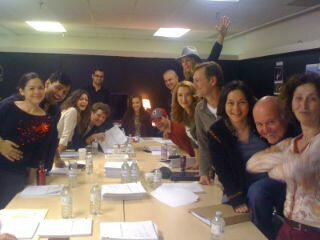 And here’s an extra special treat that Adrienne Mitchell tweeted today — the Bomb Girls cast back together at last Thursday’s table read. (Thank you, Adrienne!!)